Mr. Ramesh Advani is a member of the advisory committee of Saheli, a Jane Doe Inc. member organization serving the South Asian community of the greater Boston area. Ramesh recalls first getting involved with Saheli in fundraising efforts, only to find himself called to partner with them in reaching out to men in the South Asian community on the subject of domestic violence. “A couple of years ago, we reached out to Jane Doe to get advice on how to get started in engaging men in our community. The White Ribbon Day (WRD) campaign resonates with us as a local as well as a global issue.”

Saheli’s involvement with the WRD “gives the South Asian community a chance to interact with and get ideas from leaders of the wider community and be a part of a larger network of people doing this kind of work. It gives us access to resources and to get guidance from leaders in this work in the nation.”

On a personal level, Ramesh connects to this work because he feels “that it is very important for men to speak out against a crime against humanity. We shouldn’t be waiting for unfortunate events to happen but do more upstream education and prevention.” He notes that, “when men speak about this issue, that carries a lot of weight for other men and women. It is important for men to set the right example and provide leadership.” 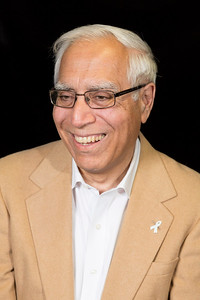 “The thing that stands out most to me in doing this work is that it is a journey and you cannot ever do enough…there is more work to be done.” Ramesh has found that one of the challenges in engaging men on this issue is that many men who have not been personally affected by sexual or domestic violence are hesitant to get involved. Additionally, among many in the South Asian community, “one of the blocks is that it is so ingrained in people’s minds, in terms of values, that whatever happens in a family is a very private thing, and no one else should get involved. There’s a kind of breaking of a code of silence in exposing it. But, this is a social issue. The good news is these issues are addressable through education.”

Ramesh seeks modes of engaging men on this issue that facilitate peer-to-peer interactions in order to deepen learning and conversation. Especially among college and high-school aged young men, he has found it is important to use media, skits, and group discussion to help set people at ease and broach difficult topics. Ramesh is also a strong advocate for ensuring cultural competency in engaging men, both within the South Asian community and also across the wide range of cultures represented in the Commonwealth: “This is not a one size fits all situation. People come with assumptions about minority communities…not all communities are the same. We must work to raise the level of cultural competencies among service providers as well as in our prevention efforts or we will alienate, put at risk and miss opportunities with the very communities we are trying to engage.”

Ramesh sees healthy masculinity as “something that is not just practiced but ingrained in the minds of men who look upon their behavior and existence in terms of gender equality. Respecting each and every individual for who they are is essential.”

As more men get involved, Ramesh is “hopeful to see how it all works, once the seed takes root.”